Sandstorm is a light ginger she-cat with green eyes.

She was an apprentice with Firestar, but then she was known as Sandpaw.

Sandpaw and Dustpaw (now Dustpelt) were best friends, and they taunted and teased Firepaw because he was a kittypet. Sandpaw was ery jealous when Fireheart became a warrior before she did, as she had started her training before him. 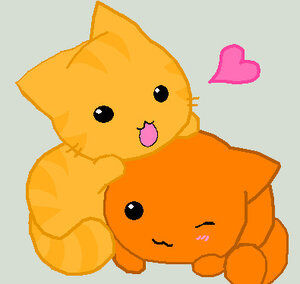 This picture is of Firestar and Sandstorm. let me make one thing clear: THIS IS NOT MINE AND I'M TRYING TO GET A COPYRIGHT STRIKE!!!!!

Sometime later, she and Firestar have kits. One is names Squirrelflight (a tiny orange she-kit) and the other Leafkit (a brown tabby she-kit with white paws and chest) in honor of the leader of SkyClan, Leafstar, and maybe even Spottedleaf.

Community content is available under CC-BY-SA unless otherwise noted.
Advertisement