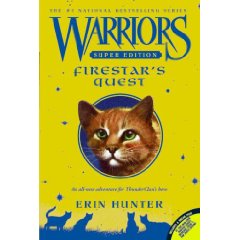 Firestar's Quest is about when Firestar gets dreams from a the mysterious SkyClan leader. SkyClan is the fifth Clan that was driven out of the forest when Twolegs invaded their territory. SkyClan's leader tells him he needs to rebuild SkyClan.

He and his mate, Sandstorm, ourney to agorge a moon's distance away. There they find caves, perfect for a Clan of cats to live in. Firestar had imagined at least some cats to be there, trying to live like a Clan, but the only cat they found there who knew about SkyClan was an old loner named Sky.

Firestar wanted to leave, but Sky made him stay to rebuild the Clan.

Community content is available under CC-BY-SA unless otherwise noted.
Advertisement